Historic Ashtabula Harbor on Monday was crowned winner of the America’s Main Streets contest, with a $25,000 prize.

The contest by the small business group Independent We Standrecognized Bridge Street in Ashtabula, in the northeast corner of Ohio, above 302 other entries, including Cleveland Heights’ Cedar-Lee area.

More than 200,000 total votes were cast by the public nationwide in the third annual contest.

“Time and time again, we see America’s Main Streets not only surviving hardship but showing innovation and ingenuity in the way they do it,” B 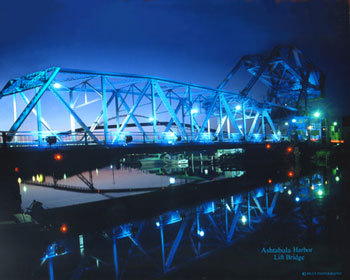 ill Brunelle, co-founder of Independent We Stand, said in a news release. “This port community pulled together to survive changes in the shipping industry in the early 20thcentury, expanded to serve post-war needs in the 1950’s and reinvented itself in 2008 when faced with serious economic challenges. We look forward to awarding the grand prize to this motivated group and seeing how they further impact local independent businesses and the people who support them.”

Bridge Street at the turn of the 20th century was a boomtown, exploding when railroads connected Ashtabula Harbor to the mills of Youngstown and Pittsburgh and iron ore and coal streamed in and out of Lake Erie’s busiest port. Legend says that at one point Ashtabula was one of the three most dangerous ports in the world, along with Calcutta and what was known as Shanghai.

Then the boom ended, and the buildings sat vacant until the end of the next century, when entrepreneurs formed the Ashtabula Lift Bridge Community Association in response the closure of the bridge, which leads cars over the Ashtabula River, for repairs in 2008.

The association now hosts an annual arts festival, Beach Glass Festival and Wine & Walleye Festival, which draws thousands of visitors. A boutique hotel and luxury townhomes are on the way.

“Ten years ago, Bridge Street was not the regional destination that it is today. Now, it is a ‘place to be,’” says association board member Melinda McNutt said a in release. “It is our community and the small business owners we have to thank for their hard work, community pride and determination to not only survive the 2008 bridge closure but to persevere and bring the community to where it is today.”

Independent We Stand will host a “Main Streets Make Us Better” event during the annual Wine and Walleye Festival, on the weekend of July 27-29, 2018. The association will invite the community to choose a beautification project to be funded by the $25,000 America’s Main Streets grand prize.

A few other reasons to travel to Ashtabula this summer: